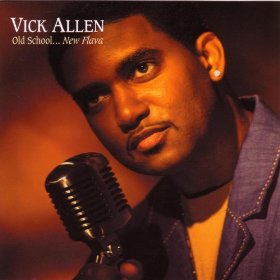 VICK ALLEN started singing when he was five years old and baby, look at him now! He’s become one of the hottest southern soul acts and is known as “The Velvet Voice of Soul.” Vick has an unmistakable sound and some of his hits include “I’m Hooked, If They Can Beat Me Rockin’, Forbidden Love Affair, Since You’ve Been Gone, Marry Me,When You Pack Your Bags,and so much more. His song Soul Music is beautiful and has an old school feel. In it, he says there's nothing like soul music and it's what he wants, it's what he needs. His hit, Crazy Over You, stayed at the number 1 spot on the southern soul charts for months! Some great lines in this song include: You got me twisted in the morning, shook up in the evening, broke down in the afternoon; when it gets down to it baby, I'm crazy over you.

Vick grew up in Jackson, Mississippi, and began singing and playing the piano when he was only five years old. As with many artists, he began his musical career in the gospel music industry and continues to play an important role in that field. Here's a little known fact: he produced and recorded his first CD when he was only 15 years old!!! Vick is a hugely talented man and makes beautiful music. We look forward to his continued success and the great music he’ll give us for the years to come.